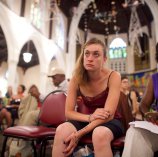 On Tuesday, Ms. Grover invited me to a women’s speak-out event at a church downtown that was organized by the social justice group Global Women’s Strike.

The event’s attendees skewed older and much more local than the protest on Monday did. Here were people invested in the unglamorous work of coalition building — activists on the left who had been around before Mr. Sanders announced his presidential campaign, and who will stay involved long after November.

Global Women’s Strike, US is mentioned in this profile of the movement around Bernie Sanders, and where it goes from here.