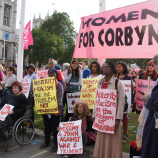 A new movement announced itself in September 2015 when Jeremy Corbyn was elected Leader of the Labour Party by a landslide. Since then, almost every established media has been busy witch-hunting, undermining and insulting that movement by targeting Corbyn and John McDonnell his shadow chancellor. These two MPs have been working together for decades, representing the movement in the corridors of power. They have been tested.

As we proceed towards the second leadership election, the movement continues to grow. And so do the dirty, nasty tricks of those who hate it. They are no doubt encouraged by what Len McCluskey, gen sec of UNITE, calls the ‘dark practices’. As he says, when “power and authority face challenge […] they do not sit idle”. So we have to win twice to take power once. In response we are beginning to call it without censoring ourselves as we have done for so long:

69 women, including myself, have written the letter below in protest at the 44 women MPs blaming Corbyn for ‘abuse and intimidation’ from his supporters. – Selma James

We, the undersigned, women Labour members or supporters condemn attempts by some women MPs . . .

We, the undersigned, women Labour members or supporters from different backgrounds, ethnicities and regions, condemn attempts by some women MPs to blame the Leader of the Labour Party Jeremy Corbyn and shadow chancellor John McDonnell for alleged intimidation. The accusations are baseless and are part of an escalating witch-hunt against Corbyn and his supporters.

The tragic murder of Jo Cox MP, for which a right-wing racist with mental health problems has been charged, has been invoked as if it was connected with anti-racist, pro-refugee Corbyn. A brick through the side window of a building used by many groups, including the local MP, has been attributed to Corbyn followers without any proof. And we are warned against holding peaceful demonstrations outside MPs offices or calling for them to be deselected.

Corbyn’s vote against a secret ballot at the NEC to decide on his right to stand as the incumbent in the leadership election, is described as supporting bullying. Many of us regret that the ballot was secret as it deprived us of information we have a right to about where NEC members stood on the question of Corbyn’s mandate.

Political disagreement is being characterized as threatening, abusive or intimidating, especially where the MPs or NEC members are women. Women in politics have no right to discredit legitimate political opposition as gender based intimidation. What is wrong with members and/or constituents peacefully protesting outside MPs offices to show their disapproval? MPs are supposed to be public servants, not masters, and the public has a right to peacefully hold them to account. Nor is it the job of the leader to shield MPs, women or men, from accountability. Yet Corbyn and McDonnell are being attacked for refusing to police legitimate political expression.

While we have not witnessed the “trend of escalating abuse” these MPs claim, we have witnessed an attempted parliamentary coup against the membership which elected Corbyn by a landslide, and what Len McCluskey called “the political lynching of a decent man”. We will not forget that none of the anti-Corbyn MPs objected when, during PMQ, the Tory PM had the nerve to tell Labour’s leader to “Go”. Corbyn and McDonnell have received death threats, which are not acknowledged or even mentioned. MP Jess Phillips told the media that “I would knife Jeremy Corbyn in the front, not the back”, which could be interpreted as condoning violence or even inviting it. She also told Diane Abbott MP who supports Corbyn to “F*** off”, not a sisterly way to disagree. Yet neither Corbyn nor McDonnell has tried to make political capital out of any of this.

It is the anti-Corbyn hierarchy that has expelled and suspended members without transparency or due process, banned constituency meetings, cancelled the results of free and fair elections such as in Brighton and Hove CLP, and denied members the right to vote in the leadership election unless they pay an additional £25 poll tax. When Angela Eagle was asked on the Andrew Marr show would she stand down if her constituency party rejected her, she replied: “The constituency parties have been suspended for this entire election.” (http://www.bbc.co.uk/programmes/p041r0vz)

UNITE’s general secretary, Len McCluskey, who has been in politics long enough to understand the workings of the establishment, has said that the security forces are likely to be “involved in dark practices” to discredit Corbyn. “When power and authority face challenge [as they do with Corbyn] . . . they do not sit idle.” (Guardian 25 July 2016)

Why isn’t this being considered before targeting Corbyn & co for social media trolls and agents provocateurs?

After the latest accusation (turned down by the Speaker of the Commons) that the parliamentary office of an MP who had resigned from the shadow cabinet a month before was “broken into” by McDonnell’s staff, he appealed to MPs publicly “to stop” trying to destroy the Labour Party to bring Jeremy Corbyn down.

We condemn any attempts at smears and misinformation. We demand that the Labour Party re-instate: ● all members’ right to vote ● all CLPs’ right to meet ● and all suspended members who have been denied a chance to know in detail and answer the allegations against them.

This contempt for the membership augurs badly for how the election of Labour leader will be run this summer. Many people are worried about this. There seems to be a disrespect for the right of every individual member to express their democratic choice.

Corbyn’s leadership, the most democratic, anti-sexist, anti-racist and anti-war this party has ever had, has inspired the mass participation of women and men in shaping Labour politics. His anti-austerity programme targets “inequality, neglect, insecurity, prejudice and discrimination” – not only gender balance in Parliament but pay equity for women who are “over-represented in the lowest-paying sectors: cleaning, catering and caring – vital sectors of our economy, doing valuable work, but not work that is fairly rewarded or equally respected.” It is sad that women MPs, some of whom were part of the first -ever shadow cabinet with a majority of women, have not welcomed this “new politics”. We are glad that one of them has unresigned and we hope that the others will reconsider.

A shorter version of this letter went to the Guardian, which didn’t publish. The Independent  changed ‘women’ to ‘female’ and took out ‘supporters’. We objected to being characterized as ‘female’ when MPs remained ‘women’ and pointed out that while most signatories are members of the Labour Party some are supporters.