On the first day of the UN Decade for Women in 1975, the women of Iceland took the day off to demonstrate the importance of all their work, waged and unwaged, in the countryside and the city. Almost all women who were physically able came out of their homes, offices and factories, and even female television presenters were replaced on the screen by men holding children. Some 90% of women took part. They called it a day off but we at the International Wages for Housework Campaign called it a strike, and took as our slogan their placard which said: “When women stop, everything stops.”

Iceland was not international but it was of international significance. What moved them to strike had to be moving in the souls of women everywhere: the question was: when would it manifest itself?

In 1985, at the final conference of the UN decade in Nairobi, we had won the UN decision that unremunerated work at home, on the land and in the community should be measured and valued. We called Time Off for Women for 24 October and a number of countries joined us. But we could not sustain international action.

It was not until 1999 that Margaretta D’Arcy, a writer, anti-war and Irish Republican activist, called for a national strike of women in Ireland to mark the new millennium on 8 March 2000 and asked the Wages for Housework Campaign to support her call. I wrote to the National Women’s Council of Ireland, telling them that if they called the Irish women out on strike, we would make it global. They didn’t, but we did. We launched the Global Women’s Strike with Margaretta and women from a number of other countries at the UN in New York in 1999. In most of the 60 countries where women went on strike it was a celebration, not a mobilisation. But we were making a variety of demands. The first was: “Payment for all caring work – in wages, pensions, land and other resources.” What was more valuable than raising children and caring for others, we asked. “Invest in life and welfare, not military budgets and prisons.”

The more women went out to work, the harder it was to also be a carer, and what was most galling was the lower pay for doing a double day. Caring and pay equity have risen on the political agenda, as well as other injustices that women face, beginning with rape and domestic violence often going unpunished.

Today, the idea of women massively withdrawing labour, waged and unwaged, is not a reality yet

Two years ago, two important movements manifested themselves. In Poland women went on strike to stop anti-abortion legislation. They succeeded in getting the government to back down. In Argentina, following police inaction after the rape and murder of a number of women, hundreds of thousands took to the streets with the slogan Ni una menos (not one less). Their call for an end to femicide swept across Latin America and beyond. This spoke to a pervasive injustice – in the UK, for example, two women a week are killed by partners or ex-partners. As a result of Poland and Argentina coming together, the International Women’s Strike was formed last year and co-ordinated by Polish women. It was agreed that each group would determine their own demands. There were regular four-hour Skype calls (with English and Spanish translation) with women from more than 30 countries exchanging information about what they would be doing. In some countries, hundreds of thousands downed tools for some part of the day, had rallies and banged pots; in others, the events were smaller.

Today, the idea of women massively withdrawing labour, waged and unwaged, is not a reality yet. The actions now are often overtly anti-racist and anti-every discrimination, anti-poverty, anti-war, anti-deportation and anti-imperialist, including in Trump’s US. They are always anti-violence. In Peru, the strike slogan is: “If our lives have no value, produce and reproduce without us!” Every sector brings its own concerns. Peruvian domestic workers are launching their petition: “A living wage for caring work – in your own home and other people’s.”

But how can you strike if you can’t risk being sacked or endangering those you care for? This has always been the dilemma, especially of the carer on whom vulnerable people depend. In countries such as Spain, where there is general recognition of the strike validity and even union backing, it’s easier for women to walk out for at least part of the day – hundreds of thousands are expected to do just that. 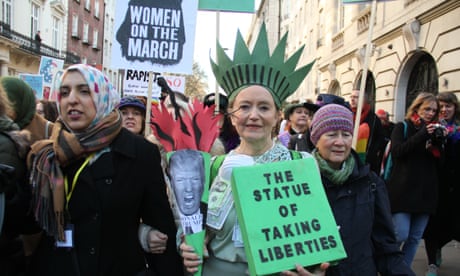 In the UK, where such support is not yet forthcoming, women can still publicise our situation and what we want changed in call-ins and letters to the press, returning from lunch even 10 minutes late, banging pots in the streets or at the window, as women in Spain did against the 2003 Iraq war.

The Global Women’s Strike is putting the family courts on trial for unjustly taking children from their mothers in a speak-out in the shadow of parliament; cleaners are demonstrating for a living wage; there is a sex work strike for decriminalisation in Soho; and a picket of Unilever in support of the Sisters of Rohingya’s call for disinvestment from Myanmar to end the rape and genocide there.

In Germany, another possibility to improve women’s lives has opened up, which we are bringing to the strike. Some 3.4 million members of the IGMetall union are winning the right to a 28- (instead of 35-) hour week for at least two years in order to care for children and elderly parents. This is what we can win when striking and care come together.

• Selma James is founder of the International Wages for Housework Campaign