Women are more likely to be single parents and carers, which is why the attacks on welfare under the universal credit policy have been an act of political misogyny, writes SELMA JAMES and SOLVEIG FRANCIS

THE FURY against universal credit (UC), imposing destitution and even death, is growing, even among Tory MPs.

While all claimants will be affected, women and children are its first targets and all on low incomes are undermined. As welfare is eroded, we cannot turn down even starvation wages. Bear in mind that UC rates are frozen until 2020, regardless of inflation.

UC combines income support, jobseeker’s allowance, employment and support allowance, working tax credit, child tax credit and housing benefit, most often claimed by women who, especially when we have children and other dependents, have the lowest incomes and are the ones who do without to meet the survival needs of those we care for.

The £37 billion siphoned out of the welfare budget since 2010 was mainly stolen from women. Women, especially single mothers and disabled women, are austerity’s biggest losers.

UC cuts children’s benefit — money for the second child is £11 lower than for the first and there is no money for subsequent children, which is a loss of £232 a month per child, for no reason except state control of fertility for low income women. This especially hits communities with larger families, for example Asian and Irish.

There is one degrading exception to the third or subsequent children being deprived of subsistence. Mothers can try to convince jobcentre strangers that this child was conceived by rape.

After the first two children, twins must share the benefit of a single child. The money for some disabled children is halved from £61 to £32 and 25,000 disabled single mothers will lose about £250 a month because severe disability premium is abolished.

Would-be claimants face multiple deterrents. You claim on line and within seven days must arrange an interview with a work coach.

Women with literacy problems, no smart phone or internet access, who need the library but find it closed or must stay with a sick child and miss a deadline, have been cut off. Job Centres are closing — yet another obstacle.

Those transferring to UC from tax credits have been told they won’t lose out, but “change of circumstance,” such as moving home, demands a fresh claim and this is always at the lower rate.

Domestic violence victims fleeing to a refuge — a “change of circumstance” — will be further assaulted with a lower rate.
The waiting time for the first payment is five weeks. Claimants can survive this yawning gap by applying for a DWP loan at 40 per cent interest!

In areas where UC has been introduced, evictions have soared, food bank use doubled and women forced into prostitution. DWP refuses to release reports on UC-related deaths. Dickensian class society never died.

UC is structured to prevent women having the independent income established by campaigning MP Eleanor Rathbone in 1945 with Child Benefit, paid to mothers, and later Child Tax Credit, but UC, including its child element, is paid monthly to the main wage earner, usually the man.

It reinforces the power of men, including violent ones. This was intentional. UC architect, Iain Duncan Smith, told the 2010 Tory Party conference: “There is no better shield from child poverty than strong and stable families.”

The Child Support Act (1993), abolition of one parent benefit (1997), and from 1999 ever tougher compulsory ‘work-related’ requirements for mothers (even those with infants), were the beginning of the end of single mothers’ financial independence. Our campaigning with breastfeeding mothers in 2009 eventually won an exemption for mothers of children under one, which we have kept under UC.

These cuts made way for the Welfare Reform Act 2012 which introduced UC and phased out Income Support. It also set a cap on how much benefit claimants without a waged job could get from all sources regardless of rent or number of children.

A legal challenge by single mothers failed in 2015. Judges deemed the cap to “breach the UK obligation … to treat the best interests of children as a primary consideration” but accepted it as “legitimate.”

Baroness Hale, dissenting in the Supreme Court, said the cap “breaks the link between benefit and need.”

Under UC, those accused of “not trying hard enough” to get a job are sanctioned more harshly. A work coach decides whether a woman escaping domestic violence can be exempted from job-seeking for 13 weeks.

The latest budget changes little. People can keep £381 — it was £298 — a month of their earnings before 68p is clawed back from every £1 earned above this. This ensures work does not pay, but we are still forced to do it.

£1 billion over five years is the new allocation for such changes, compared to the £1 billion a year added to defence.

UC drives austerity forward, reinforcing the attack on women who suffer 86 per cent of its cuts. Rather than simplifying, it complicates and mystifies, imposing a hostile environment on all of us, especially women, the carers.

A disproportionate number of those targeted are people of colour and/or immigrants. UC reinforces the power of men within the family even while it cuts men’s benefits too.

Our struggle to defeat it is one with the struggle for a living wage.

Employers benefit from a desperate workforce deprived of the benefits we’re entitled to. Among the hardest hit are the mothers and other unwaged family carers who, like all workers, are entitled to a living wage.

Instead they are forced into the lowest paid work while squeezing caring work into a double day.

The McStrikers and the anti-UC protests are central to the movement to finally end poverty. 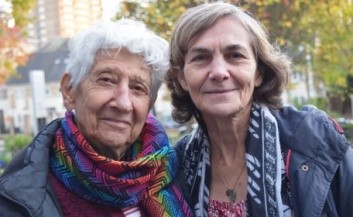