Skip to content
by Selma James and Ron Augustin 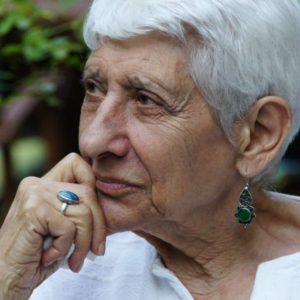 Ron Augustin is a freelance journalist and editor based in Brussels. In collaboration with the International Institute of Social History in Amsterdam, he has been involved in editorial and digitization projects documenting anti-imperialist movements of the 1960s.

Selma James was born to a Jewish family in Brooklyn, New York, in 1930. She worked in factories as a young woman and, at the age of 15, joined the Johnson-Forest Tendency (sometimes called the Johnsonites), a group within and eventually a split from the U.S. Workers Party, founded by C. L. R. James, Raya Dunayevskaya, and Grace Chin Lee (later Boggs) under the respective pseudonyms J. R. Johnson, Freddie Forest, and Ria Stone. In 1952, Selma wrote the classic pamphlet A Woman’s Place. Four years later, she married C. L. R. (short for Cyril Lionel Robert) in England, where he had been deported. The two were together for more than twenty-five years, each with their own political activities but also sharing important struggles.

Selma James went on to become a founding member and organizing secretary of the Campaign Against Racial Discrimination, a British organization established in 1965. In 1972, the publication of her and Mariarosa Dalla Costa’s groundbreaking The Power of Women and the Subversion of the Community, which discussed how women’s unpaid housework and care work is crucial to the production of the working class and, thus, the economy as a whole, launched the domestic labor debate inside the women’s movement. That same year, the International Wages for Housework Campaign was formed. James was also the first spokeswoman of the English Collective of Prostitutes, started in 1975 to advocate for the decriminalization of sex work and sex workers’ right to recognition and safety. In 1975, James helped found what became the Crossroads Women’s Centre, home to more than fifteen different groups—including Black Women for Wages for Housework, Wages Due Lesbians, and Women Against Rape—and now located in the heart of London’s Kentish Town, a few streets away from where Karl Marx lived with his family for more than ten years. In 1983, she delivered her important “Marx and Feminism,” later published as a pamphlet.

This article will be released in full online September 29, 2019. Current subscribers: please log in to view this article.
https://monthlyreview.org/2019/09/01/beyond-boundaries/